Freedom: A Work in Progress 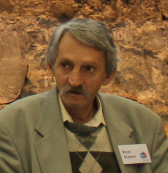 This chapter celebrates, and mourns, the remarkable life of Rusi Kosev Stanev.  Rusi passed away on March 9, 2017, before our co-authored chapter was complete.

The chapter that results is composed of fragments of writing that Rusi produced for the project, including in the last weeks before his death, and Sheila’s reflections on those fragments. Our subject is Rusi Stanev’s unfinished project: freedom.

Rusi’s writing for this project, like so much of his activities over the past two decades, was devoted to the subject of achieving freedom from the combined forces of guardianship and institutionalization which had consigned him to a special kind of hell.  Rusi experienced the profound satisfaction of vindicating his rights to liberty and to be free of cruel and inhuman treatment in the celebrated judgment of the European Court of Human Rights in Stanev v Bulgaria, in 2012.  But he died still under guardianship, and still living in an institution.  How is this possible?  What kind of strategies, or lessons, might we take from Rusi’s experience both of human rights deprivation and (frustratingly partial) human rights victory, in order to advance the CRPD’s so-called paradigm shift – that is, to dismantle state policies centring on confinement and control of persons with (or labeled with) psychosocial or intellectual disabilities, in favour of policies centring on socio-economic and other relational supports?

Rusi’s late writings reach back to his childhood and youth to reflect on a time before he was consigned to the status of an object: a time of (faint) hope.  I identify two themes in these writings — reciprocity and resistance — which I suggest give further content or meaning to the overarching ideal of freedom on which Rusi dreamed.  I reflect, too, on Rusi’s initiating me, over our brief time as co-authors and friends, into possibilities for subverting oppressive power relationships and building trust across difference, for instance through the practice of reciprocal gifting.

Ultimately, I suggest that advocates can take from Rusi’s life stories (his last gifts to us) two key things: 1) the importance of strategically coordinating challenges to deprivation of legal capacity with challenges to failure to enable independent living in the community on equal terms, so as to expose these as mutually-constitutive harms; and 2) the importance of seeking to effect the CRPD’s paradigm shift not only at the level of state-subject relations (and so through national and international law reform and litigation strategies), but also at the level of more personal, localized, micropolitical actions and relationships: by building new pathways to reciprocity in one’s relationships with differently situated others.